There currently are 48 guests online. 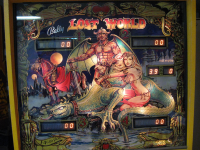 Just wanted to thank you AGAIN for taking on the...

I, Lee Morris started in the game business in 1974 in up-state New York as a service technician in a repair shop. This was a large operator that liked my natural ability to fix things.  I enlisted in the Air Force in 1976 and found my Beautiful wife Kerry at Lackland Air Force Base. We worked on games in Italy and San Francisco while serving.  In 1980 Kerry made me move back to San Antonio and we started our first repair company called “Arcade Service Company”. This was during the heyday of video games like PacMan, Galaga and Defender. We had over 30 game rooms under service contract at the time.  In 1988 we started “The Pinball Shop” on IH35 at Binz Engleman after the video game rooms faded away. This was a big hit until in 1992 when we took a job at a distributor as parts and service manager.  In 1995 we started “Morris Technical Services” and did mostly video monitor repair for the game and PC Computer shops around town. In 2003 we went to work for Amusement Distributors of Texas as the service manager. We became a partner and stockholder of ADI in 2010.  In May of 2012 I was persuaded to resign as president of Amusement Distributors and hand over my stock. The game distribution business is almost dead.  So few machines are produced, and most are sold direct, killing distribution. This was a huge disappointment for us.

Currently we would like to get back to our roots, servicing operators needs and the pinball restoration business. We never really got out of pinballs. All along our career we have maintained a working repair shop in our home. We have been restoring pinball machines every week since the beginning. Kerry is very good at cleaning and repairing playfields.  I repair the electronic and mechanical components.  All our customers have been word of mouth until now.

We will also perform some service call work for the amusement machine operators in the local area. We have limited space for arcade machine repair in our home shop.

We maintain an Amusement Machine Repair license with the State of Texas.  We do not operate games.